Suffrage As a Revolution

Women’s right to vote was not fought only by a few famous white women trailblazers. There were some important white leaders in the 19th century, but it took many women to make our suffrage a reality. The real trailblazers in American women’s suffrage, in fact, were Native American women.

Kate Clarke Lemay, a historian and curator at the National Portrait Gallery, recently told a group of fellow scholars gathered by the N.Y. Times that “Suffrage isn’t boring history, it’s exciting and radical. 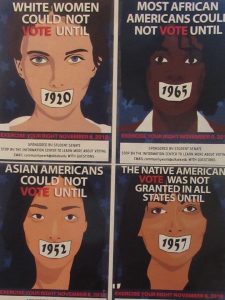 In fact, women staged one of the longest social reform movements in the history of the United States. This is not a boring history of nagging spinsters; it is a badass history of a revolution staged by political geniuses (Source: Women Voting Rights Suffrage Centennial).”

Those political geniuses were not simply the white women whose names are Elizabeth Cady Stanton and Susan B. Anthony. Women of color, thousands of women of all educational and economic levels, and immigrant women paved the way. Women also were not “given” the right to vote—they fought for and won it. They talked to their neighbors, held meetings, challenged their fathers, sons, husbands, and employers, and marched in the streets. They often put themselves in physical and economic jeopardy as the became unsung heroines of the movement.

We want to share suffrage stories from MN and the nation with you.