Click here to learn about our Racial Justice Book Club! 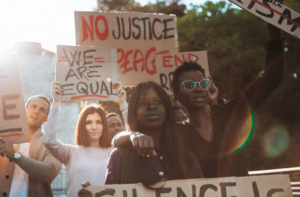 Racism exists all too often in Minnesota. It is not always overt, but rather manifests in covert behavior, restricting people of color from access to prosperity and well-being.

Examples of these disparities include:

According to data collected between 2004 and 2012 by the FBI, showing that a black person in Minnesota is:
8.86 times more likely to be arrested than a white person for disorderly conduct,
7.54

times more likely to be arrested for vagrancy,

Economic Opportunity:
U.S. Bureau of Labor Statistics has revealed that over the last five years Minnesota ranks in the top five states in the nation for the largest gap between unemployment rates between whites and African-Americans and between whites and Latinos.

Targets of Sexual Trafficking and Sexual Violence:
In a recent report by the Office of Victims of Crime, of the confirmed sex trafficking victims, 40.4 percent of victims were African-American. This is almost four times higher than the percentage of African-Americans living in the United States, which the US Census Bureau currently lists as 13.1 percent of the total population. The FBI claims an even more surprising statistic for arrests under the age of 18, black children make up 55 % of all prostitution-related arrests in the U.S.

MN NOW participates with IDLE NO MORE, BLACK LIVES MATTER, and Neighborhoods Organizing for Change events to protest the abuse of police power against people of color, and the sexualization of women of color that ultimately leads to sexual abuse and exploitation. To promote the work of the Minnesota Legislature’s POCI (People Of Color/Indigenous) Caucus, we launched the “Racism is a Public Health Crisis” social media campaign to have a space to explain what that means and how we can create a better society free of racism in Minnesota.

You can help us expand the fight for racial justice. To learn more about how you can participate, visit the Get Involved section of our website.

Get Involved! Volunteer As Part Of Our Racial Justice Committee