In the 1870s, women across Minnesota organized local women’s suffrage groups. In 1875, the Minnesota Legislature recognized women’s right to vote in school board elections. Many women, however, wanted to vote in all elections. 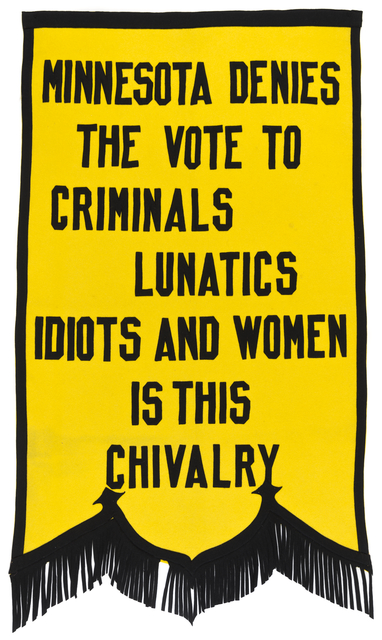 Seeing the need for a statewide agency, fourteen women formed the Minnesota Woman Suffrage Association (MWSA). By 1882, the MWSA had grown to two hundred members.

In 1885, MWSA president Martha Ripley convinced the American Woman Suffrage Association (AWSA) to hold their annual convention in Minnesota. This national event demonstrated the importance of the MWSA. It also drew the attention of Minnesota’s male lawmakers. The MWSA eventually became a chapter of the National American Woman Suffrage Association (NAWSA), which formed in 1890.

In 1893, the MWSA convinced the Minnesota Senate to take up women’s suffrage. President Julia Bullard Nelson worked with Ignatius Donnelly, a Populist state senator. The Populistsregularly supported a women’s suffrage plank. Nelson herself was a Populist school superintendent candidate in 1894. Nelson and Donnelly initially sought the vote for women in municipal elections. However, the Senate went further. Its members voted to remove the word “male” from the state’s voting requirements. The bill passed thirty-two to nineteen. However, this change did not pass the House. That chamber did not have time to take it up before the legislative session ended. Even if it had passed the House, however, the voters of Minnesota would have had to approve it before it became law.

After the failure of the 1893 amendment, the movement continued. However, the MWSA was unable to build on its earlier success. The MWSA and its ally, the Political Equality Club, placed women’s suffrage before the state legislature every session. Each time, the bill either died in committee or was defeated.