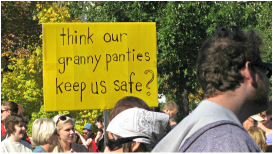 Violence against women affects every Minnesotan, whether they realize it or not. As human beings, we all deserve freedom from violence. Statistically, women in particular are especially vulnerable to instances of domestic abuse, sexual assault, sex trafficking, street harassment, and stalking.

According to the Minnesota Coalition for Battered Women’s 2017 Femicide Report, at least 24 Minnesotans were killed due to violence from a current or former intimate partner in 2017. This included 19 women and five friends and family members.

Simply put, being a woman comes with its own set of dangerous realities. Nearly 1 in 4 women are beaten or raped by a partner during adulthood. 1 in 6 women and 1 in 33 men have experienced an attempted or completed rape. Every day in the United States, an average of three women are killed by a current or former intimate partner. [Source: MCBW]

The ever-present threat of violence begins at a young age for girls. According to MNCASA, “by the time Minnesota girls graduate from high school, about 12% report a date-related sexual assault. By the time they finish college, 29% of Minnesota females have been sexually assaulted. And by mid-life, 33% of Minnesota women have experienced a rape crime – approximately one in three.”

It isn’t just at home or out on the street that women are in danger. It’s also in K-12 schools. In 2014, MN NOW worked  to pass the Safe and Supportive Minnesota Schools for All Act. This bill helped schools define bullying and harassment, and eliminate tolerance for bullying and violence based on “actual or perceived race, color, creed, religion, disability, sex, age, national origin, immigration status, marital status, family status, socioeconomic status, status with regard to public assistance, academic status, physical appearance, sexual orientation,  and gender identity or expression.

Not only is violence against women harmful to Minnesotans emotionally, physically, and psychologically, it harms us financially as well. Sexual violence costs the State of Minnesota almost $8 billion annually. With limited funds, we can’t expect our state government to solve the problem of violence against women alone, which is why activism and education by non-profit organizations is essential to solving this problem once and for all.

Let’s organize to make a safer world for generations to come. If you want to create a better Minnesota, a state where we can all live with freedom from violence, Get Involved with Minnesota NOW.