According to a study written in 2016, an increasing number of women entered the field of diplomacy in the prior two decades.

According to the study, globally Foreign Service until recently remained a patriarchal stronghold, indeed one of the most male-dominated spheres, and one into which women have had a difficult time entering. The recent entry of larger numbers of women thus constitutes a rather dramatic change in the sexual makeup of diplomats. 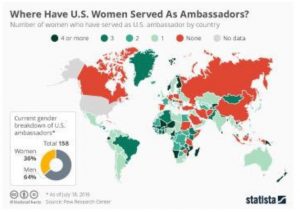 Some appointments, generally those for states at the center of military and economic power, are considered much more weighty than others. Being appointed ambassador to London or Moscow is clearly not equivalent in significance to being posted in Maputo or La Paz.

The study showed the share of female ambassadors is low, glaringly so. Eighty-five percent of the world’s ambassadors are male, making this high prestige post yet another international post that is still dominated by men. The share of female ambassadors is not distributed uniformly among countries and regions, however. Overall, the Nordic countries send out the most women, followed by North America and Oceania, in contrast with Asia, which sends particularly few women. To be sure, there are individual countries that break this general pattern, such as the Philippines.

As the number of female ambassadors seems to be on the increase at a relatively rapid pace in the twenty-first century, however, the world of ambassadors may not remain as male dominated much longer. If you are interested in learning more, you can read the Oxford Foreign Policy study called “Gender, International Status, and Ambassador Appointments”.