In over half the countries of the world, quotas dictate by law how many women political parties must nominate for election. In 2019 women made up 24 percent of the world’s parliaments, as opposed to just 11 percent in 1995.

Here are some women Trailblazers who became the heads of state in their countries. Some of them followed in their fathers’ footsteps, and some were assassinated while in office. 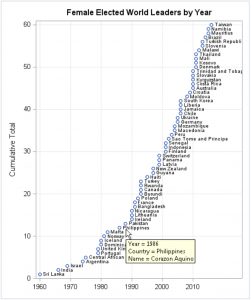 Indira Gandhi was the first and, to date, only female Prime Minister of India. She served as prime minister from January 1966 to March 1977 and again from January 1980 until her assassination in October 1984, making her the second longest-serving Indian prime minister after her father. In 1999, Indira Gandhi was named “Woman of the Millennium” in an online poll organized by the BBC. In 2020, Gandhi was named by Time magazine among the world’s 100 powerful women who defined the last century. Source: Wikipedia – Indira Gandhi.

Benazir Bhutto served as Pakistan’s prime minister from 1988 to 1990 and then again from 1993 to 1996. The hyper-educated woman held degrees from both Harvard and Oxford. She was the first Muslim woman to lead an Islamic country. Her administrations were plagued by corruption charges, and she was assassinated in 2007, but she was also the first modern head of state to have a child while in office. She worried about political opponents gunning to remove her from office, so she hid the pregnancy from everyone and was back on the job the day after giving birth. Source: Wikipedia – Benazir Bhutto.

The world’s fourth, and Israel’s first and only, woman to hold the office of Prime Minister, and the first in any country in the Middle East, Golda Meir served from 1969 to 1974.  She was described as the “Iron Lady” of Israeli politics before British Prime Minister Margaret Thatcher was called by that title. Golda Meir was born in Russia, moved to the US as a child. She was a Naturalized US citizen before emigrating to Israel. Source: Wikipedia – Golda Meir.

Margaret Thatcher served as Prime Minister of the United Kingdom from 1979 to 1990. She was the longest-serving British prime minister of the 20th century and the first woman to hold that office. A Soviet journalist dubbed her the “Iron Lady”, a nickname that became associated with her uncompromising politics and leadership style. Source: Wikipedia – Margaret Thatcher.

Ellen Johnson Sirleaf is the first woman to be head of state in an African country. This Liberian politician had an early reputation of being trustworthy in financial matters. She clashed with the demonstrably corrupt regime of Samuel K. Doe, was nearly put to death once, and eventually was sent to jail for criticizing the military-controlled government during a run for vice president. During her twelve years of exile, and while Liberia suffered a devastating civil war, she became a well-known World Bank economist. After the war, she returned to the country, was elected president, and spent twelve years in power from 2006 to 2018. Her administration was hounded by charges of the very corruption she once fought and had to fight against the Ebola virus that took over 4,800 Liberian lives. She won the Nobel Peace Prize in 2011, in recognition of her efforts to bring women into the peacekeeping process. She has received numerous other awards for her leadership. Source: Wikipedia – Ellen Johnson Sirleaf.

Sahle-Work Zewde is an Ethiopian politician and the current President of Ethiopia, being the first woman to hold the office. A career diplomat, she was elected president unanimously by members of the Federal Parliamentary Assembly on 25 October 2018. Forbes, on its annual edition of the Forbes list of The World’s 100 Most Powerful Women, listed Sahle-Work as the 96th most powerful woman in the world, and the highest-ranking African woman on the list. Source: Wikipedia – Sahle-Work Zewde.