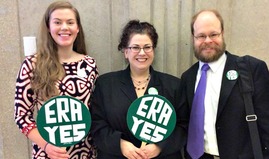 The MN NOW Constitutional Equality Committee works to add an amendment guaranteeing protections for gender equality in both our federal and state constitutions. 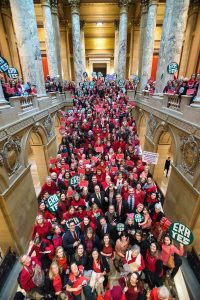 The Equal Rights Amendment (ERA), written by suffragist Alice Paul, was introduced in Congress in 1923 for the first time. In 1972, it easily passed both houses of Congress and went to the state legislatures for ratification.

MN NOW’s strategy to pass the ERA on the federal level requires removal of the imposed ratification deadline. The states listed below did not ratify the ERA, but renewed efforts to vote for ratification have surfaced in Illinois and Virginia.

Minnesota ratified the federal ERA in 1973, but unlike some states, did not pass an Equal Rights Amendment to their own state constitution. MN NOW sponsored the MN C.A.F.E. (Constitutional Amendment for Equality) Coalition to pass a state ERA in 2010, but the legislation proposed by the coalition received only one of the four required committee hearings to move the ERA to the House and Senate floors for a vote.

Get Involved! Volunteer As Part Of Our Constitutional Equality Committee