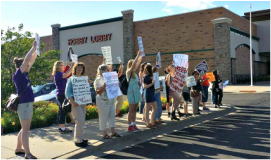 While Minnesota women are better off in many ways than other women in the U.S., we still have a lot of work to do in our state. Research done by the Women’s Foundation of Minnesota indicates that many women, especially women of color, work in female-dominated occupations that are often undervalued and underpaid. Women working in these occupations generally make less than comparable men who work in the same occupations. The wage gap continues to be a problem in Minnesota, with women earning anywhere from 20% (white women) to 43% (Latina women) less than the median year-round average income of white males.

Occupational clustering and lost earnings due to the wage gap mean that many women do not have the resources to care for their families, especially if they are single parents. Sixty-seven percent (67%) of female-headed households in rental housing and 49% of those who own their home are paying costs that exceed the recommended 30% of their income. Minnesota has the third highest cost in the United States for quality childcare, making it difficult for working mothers and families to balance the responsibilities of work and family.

Minnesota NOW supported the passage of the Women’s Economic Security Act (WESA) during last year’s legislative session. The Act was signed into law by Governor Dayton on May 11, 2014 (Mother’s Day), and does a lot to help Minnesota women and families. A few WESA highlights:

Visit the Get Involved section of our website to learn how you can help us achieve economic equality in Minnesota.