Ruth Bader Ginsburg was only the second woman ever to sit as a justice on the nation’s highest court—where she served for 27 years—and was a trailblazer for women’s rights. 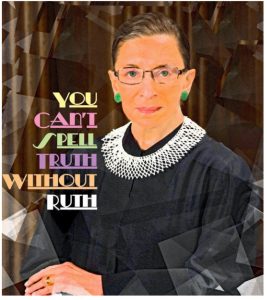 Ruth Bader Ginsburg, “The Notorious RBG”, as she was dubbed after publishing a fiery dissent to the Supreme Court’s 2013 curtailing of the Voting Rights Act, has become the subject of many a headline.

This Jewish, Brooklyn-born jurist proved a sharp advocate for women’s rights in her dedication to reproductive health services and anti-gender discrimination laws. She was a four-time cancer survivor, should anyone still doubt her toughness. Source: Wikipedia – Ruth Bader Ginsburg.

In 1956, Ginsburg became one of nine women accepted to Harvard Law School, out of a class of about 500. The dean there famously asked his female students to tell him how they could justify taking the place of a man at his school.

Ginsburg finished top of her class, but still did not receive a single job offer after graduation. “Not a law firm in the entire city of New York would employ me,” she later said. “I struck out on three grounds: I was Jewish, a woman, and a mother.”

Eventually, Ginsburg became a professor at Rutgers Law School, where she taught some of the first classes on women and the law.

The next year, Ginsburg became the first female professor at Columbia Law School and she co-founded the Women’s Rights Project at the American Civil Liberties Union (ACLU). Soon, she was the ACLU’s general counsel (meaning she represented it in court) and launched a series of gender-discrimination cases. Six of these brought her before the Supreme Court – and she won five!

She had a very clever and strategic approach—she thought it was best to take down sexist laws and policies one by one, instead of asking the Supreme Court to outlaw all rules that treat men and women unequally.

In her 27 years on the Supreme Court bench, she was a consistent moderate liberal. Her role as the senior liberal justice, after 2010, became increasingly important as the balance of opinion shifted in the court, and her scathing dissents on conservative majority decisions, particularly on women’s rights, made her a celebrated figure on the left.

But what made her historically so important was her clear conviction of the injustice of unequal treatment of women, and her absolute certainty that it could be cleansed by applying the constitution.