Eugenia Anderson, the first woman to serve as an Ambassador for the U.S., took her first trip to Europe in 1937 and what she saw prefacing World War II piqued her interest in international affairs—and her strident opposition to the totalitarianism that she saw rising in Germany. The experience motivated her to join the League of Women Voters, where she spoke out against isolationism and became an early supporter of the United Nations. 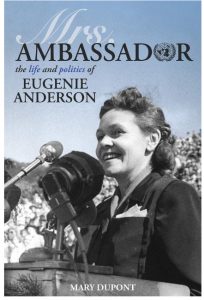 In 1944, she met Hubert Humphrey. That same year, she joined the Democratic-Farmer-Labor (DFL) Party, and in 1947, she took part in the establishment of Americans for Democratic Action, which was formed by the Democratic Party’s anti-communist liberal wing.

In 1949, President Truman appointed her ambassador to Denmark. In that capacity, Anderson helped negotiate the Greenland Pact that allowed the United States to use air bases in Greenland, and she became the first American woman to sign a treaty—the Treaty of Commerce, Friendship and Navigation with Denmark, which she drafted.

Anderson returned to the United States in 1953 and continued her political involvement. In 1962, President John F. Kennedy appointed her minister to Bulgaria—a communist ally to the Soviet Union at the time—making her the first female chief of a U.S. mission behind the Iron Curtain.

After her stint in Bulgaria, Anderson served as a member of the U.S. delegation to the United Nations and became the first woman to sit on the Security Council.