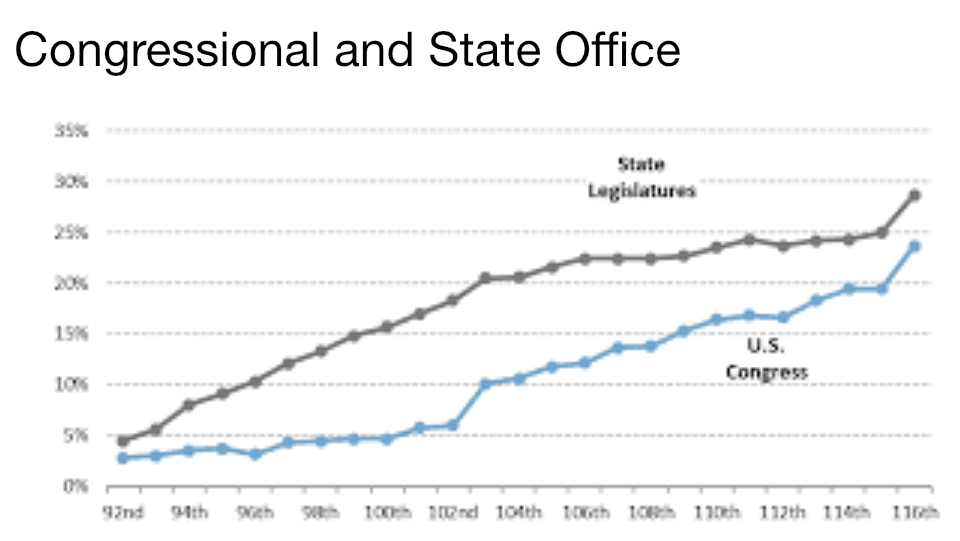 2021 was a historic year for many demographic groups of women, according to the Center for American Women and Politics, with newly elected Black women, Indigenous women, Latina women and Asian American and Pacific Islander women breaking records in the U.S. House.

It is evident that in states across the country, women are winning. But the fight is not over. Women in the U.S. House will be only 26.9% of all  members, with 28 Republican women and 89 Democrat women.

There are still four states, Alaska, Mississippi, North Dakota, and Vermont, who have never sent a woman to the U.S. House after the 2020 election, only 11% of the U.S. House were women of color.

After the 2020 election, women in the U.S. Senate were only 24% of all members, with 16 Democrat women and 8 Republican women. There are still 17 states who have never had a female Senator and only 3 women of color will serve in the 117th Senate. Source: Women’s Public Leadership.

While the prominence of women in high profile congressional races has risen over the past few cycles, state-level contests across the country have also seen a significant uptick in women candidates.

With each presidential election cycle since 2012, women made up a larger and larger share of gubernatorial and state legislative candidates. Between 2016 and 2020, the percentage of women candidates saw its largest jump, from 25 percent to 32 percent. That’s a continuation of the trend from the 2018 midterms, when record numbers of women ran for office.

Women also only make up 30.3% of all statewide elected executive officials. In 2021, only 9 women will serve as governor and there are still 20 states that have never had a female governor.

Republican women also made gains in state races, though they were less pronounced. Women made up nearly 23 percent of 2020 Republican candidates, up from 18 percent in 2016. The biggest jump came from non-incumbent Republicans. In 2016, nearly 19 percent of Republican challengers were women. That figure jumped to 27 percent in this year’s elections. Source: Open Secrets News.