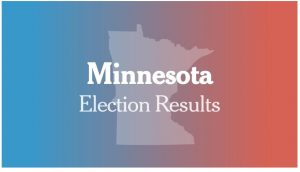 Coya Knutson became Minnesota’s first congresswoman when she was elected in 1954. Coya Knutson is remembered today for the notorious “Coya, Come Home” letter supposedly written by her then-estranged husband, Andy, urging her to give up her seat and not seek reelection in 1958. Political rivals had put him up to it, and it was seen as instrumental in her ensuing defeat. The incident is often cited as an example of sexism in American politics. Source: MNOpedia Knutson.

Elected in 2000, Betty McCollum is only the second MN woman elected to the House of Representatives. Source: Wikipedia – Betty McCollum.

Michele Bachmann was the first Republican woman United States Representative from Minnesota. She served from 2007 to 2015 Source: Wikipedia – Michele Bachmann.

Elected in 2018, Ilhan Omar is the first Somali American, the first naturalized citizen of African birth, and the first woman of color to represent Minnesota in the United States Congress. She is also one of the first two Muslim women (along with Rashida Tlaib) to serve in Congress. Source: Wikipedia – Ilhan Omar.

Following her husband’s death, Muriel Humphrey (DFL) was appointed to his seat in the United States Senate, serving for most of the year 1978, thus becoming the first woman to serve as a Senator from Minnesota, and the only Second Lady of the United States to hold public office.

Muriel had years of experience as a public speaker, and was an active Senator. According Karina Karr, Humphrey was ostracized by the all-male Senate, but served on the Foreign Relations Committee and voted reliably to support the foreign policy of the Jimmy Carter administration.

According to an official Congressional biographical summary, “Muriel Humphrey pursued her own interests during her brief tenure, supporting an extension of the Equal Rights Amendment (ERA) ratification deadline.” After consulting with President Jimmy Carter, Muriel chose not to stand as a candidate for the 1978 United States Senate special election in Minnesota for the remainder of her husband’s term. Source: Wikipedia – Muriel Humphrey Brown.

Tina Smith served as the 48th lieutenant governor of Minnesota from 2015 to 2018 before being appointed to fill the United States Senate seat vacated by Al Franken. She won the 2018 special election to fill the remainder of Franken’s term, until January 2021. In 2020, she was elected to a full Senate term. Source: Wikipedia – Tina Smith.