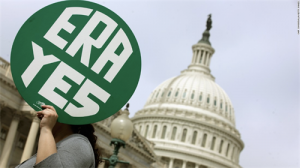 The Equal Rights Amendment is a proposed Constitutional Amendment that has 24 simple words- “Equality of rights under the law shall not be denied or abridged by the United States or by any state on account of sex.” It was sent to the states to ratify in 1972 and given an arbitrarily chosen seven (7) year deadline by Congress.

In 2020, Virginia became the 38th state to ratify the amendment, meeting the 2/3 benchmark needed to be added to the Constitution. Even though this threshold has been met, the ERA has not been enacted because of the arbitrary deadline first set for 1972 and then for 1982. Nowhere in the Constitution is there a time limit for amendments.

We are calling on President Biden and Attorney General Merrick Garland to enact the ERA as the 28th Amendment to the Constitution. Sign our petition to show your support and urge that action be taken! We can no longer wait for Constitutional equality for women!