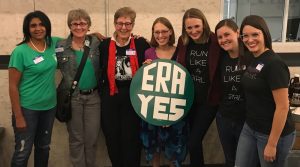 This post was written by Minnesota NOW treasurer, Beth Anderson.

If you’ve read my contributions to the Savage Pacer over the last couple years, you will know I am a passionate supporter of the Equal Rights Amendment (ERA). I think we should add it to our U.S. Constitution and to our Minnesota State Constitution. I think that women and men should be treated equally under our laws and I think that protection should be guaranteed by a constitutional amendment. Equal treatment should not be subject to change depending on legislative trends. Equal treatment is a bedrock principle of what it means to be an American and a Minnesotan.

Minnesota has already ratified the ERA as a proposed amendment to the U.S. Constitution, but we have been unsuccessful in passing an ERA to the State Constitution. Over 20 other states already have a State ERA. It’s surprising that Minnesota hasn’t been a leader in this area given our rich history of grassroots politics. With the groundswell of activism currently taking place in Minnesota, 2018 might just be the year our Constitution catches up with our principles. In 2018, let’s just pass it!

Why not? I’m not sure. I don’t know why our legislators wouldn’t want to guarantee equal protection for the women of Minnesota. Women still earn only 80 cents to the male dollar and clearly women are still facing sexual harassment in the workplace––including at the capitol in St. Paul. Whether your politics tend to be more liberal or more conservative, an overwhelming majority of people believe it is wrong to sexually harass women and it is unfair to pay women less than men for the same work.

So again, why don’t we have this amendment to our constitution? It comes down to political will. We as voters haven’t made it a priority. It’s time to change that. In 2018, let’s just pass it!

The text of the proposed amendment––the full text––reads “Equality under the law shall not be abridged or denied on account of gender.” Wouldn’t it be great if Minnesota could join with at least 20 other states in our union who have already guaranteed equal treatment between men and women in their states? It is possible for this amendment to appear on your ballot in 2018.  You just have to demand it.

Tomorrow, I will take the first step. I’ll be attending my precinct caucuses and proposing a resolution urging my party to work on passing an Equal Rights Amendment to our Minnesota Constitution. Then I’ll sit down to work on my activist calendar of events.

The 2018 session of the Minnesota Legislature is set to begin on February 20, 2018. You can find out who your legislators are, and get their contact information, by typing in your address on the Legislature’s district finder website.

My own legislators are going to hear from me regularly on this issue and I hope yours hear from you, too. Keep emailing, calling, and writing, asking them to support an Equal Rights Amendment to the Minnesota Constitution. Snip out this article, add a note, and drop it in the mail to let our legislators know we want this done in 2018.

If you want to learn more about this issue and put your activist energies to work, check out the website: www.eramn.org. If you want to meet other activists and make your voice heard, consider attending these two upcoming events. Send an invitation to your legislators to attend with you.

As an ongoing effort, keep talking about the issue. Bring it up at everything from candidate forums to family gatherings. In 2018, the entire Minnesota House of Representatives is up for election. If your legislator doesn’t support a Minnesota ERA, consider replacing them with someone who does.

We all benefit when women are allowed to participate to their fullest potential and are rewarded on an equal basis. Let’s make it illegal in Minnesota to discriminate on the basis of gender. In 2018, let’s just pass it!