We are working with the ERA Coalition to ask folks to reach out to their Senators encouraging them to cosponsor/re-cosponsor SJ Res4 for the ERA. All you need to do is change what is in BOLD to accommodate the name of your Senators. The press deadline is 3:00PM ET today, but that should not discourage them from signing on if they cannot meet today’s deadline.

We appreciate your support.

I write to ask that Senator X cosponsor SJ Res 4 to remove the deadline for ratification of the Equal Rights Amendment (ERA), affirming it is valid having been ratified by the requisite three-fourths of the state legislatures. This resolution has been introduced by Senator Ben Cardin with co-lead Senator Lisa Murkowski. Press event deadline is Monday 1/30 @ 3pm

Despite fulfilling all requirements under Article V of the Constitution to be added to the U.S. Constitution, the ERA has yet to be published by the Archivist. 100 years after its initial introduction in Congress, it is time to fulfill the promise to form a more perfect union by publishing the ERA as the 28th Amendment to the Constitution– guaranteeing all persons protection against discrimination on the basis of sex. Congress has the clear authority to remove any doubt that the ERA is currently valid having fulfilled all requirements to be added to the Constitution with this resolution.

Below is the invitation to cosponsor from Senator Cardin. The deadline to be added prior to the press announcement on the reintroduction is 3pm on Monday, January 30.

Please contact Helen_Rogers@cardin.senate.gov with any questions or to cosponsor.

Senator Cardin invites your bosses to sign on to SJRes4, a joint resolution that he introduced this week with Senator Murkowski to remove the deadline for ratification of the Equal Rights Amendment (ERA) and to declare that the requisite three-fourths of the states have ratified the amendment. Last Congress, the entire caucus joined SJRes1 as cosponsors along with Senators Murkowski (co-lead) and Collins. The House passed companion legislation in the 117th and 116th Congresses. The attached redline reflects a language change from our previous resolution(s) to better reflect the final state ratification (Virginia in 2020). The deadline to be added before our press announcement on the reintroduction with Congresswoman Ayanna Pressley (MA-07) is 3pm Monday, January 30. Please contact Helen_Rogers@cardin.senate.gov with any questions or to cosponsor.

Congress first passed the ERA and sent it to the states for ratification in 1972. The text reads as follows:

Equality of rights under the law shall not be denied or abridged by the United States or by any state on account of sex.
The Congress shall have the power to enforce, by appropriate legislation, the provisions of this article.
This amendment shall take effect two years after the date of ratification.

In the preamble of the resolution proposing the amendment, Congress specified that the measure required ratification by three-fourths of the states (38 states) within 7 years. A joint resolution enacted by Congress later extended this deadline to 10 years, but only 35 out of 38 states had ratified the ERA by the revised 1982 deadline. Since then, Nevada (2017), Illinois (2018), and Virginia (2020) have ratified the amendment. Congress has clear authority to clarify that the final three ratifications are valid by removing the deadline. CRS reports with additional history and context are available here and here.

In January of 2022, President Biden issued a statement calling on Congress “to act immediately to pass a resolution recognizing ratification of the ERA.” The Biden Administration’s 2022 DOJ Office of Legal Counsel opinion, which reflects the view that Congressional action is necessary, is here.

The only right explicitly guaranteed regardless of sex in the U.S. Constitution is the 19th Amendment right to vote. The Equal Protection Clause of the 14th Amendment has been invoked successfully in sex discrimination cases, but the outcomes of these challenges have been inconsistent. The ERA would serve as a new tool – for Congress, for federal agencies, and in the courts – to advance equality in the fields of workforce and pay, pregnancy discrimination, sexual harassment and violence, reproductive autonomy, and protections for LGBTQ+ individuals. 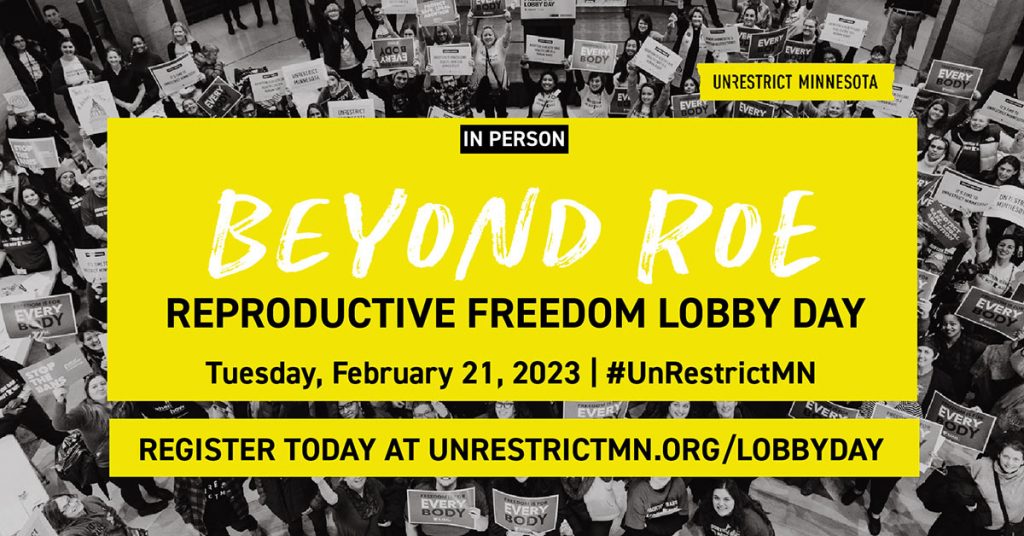 Minnesotans made their voices heard by electing the first pro-reproductive freedom state legislature in decades. But the work isn’t done, now we must show up louder and stronger than ever to push decision makers to pass bold legislation protecting and expanding abortion access in Minnesota.

Our Leadership Agenda for Abortion Access creates a clear path, but legislators need to hear from you that reproductive rights, health, and justice is still a priority for you. On lobby day, you will have the opportunity to ask your representative to:

You will get the resources and training you need to be equipped to talk to your representatives. You’ll also get to hear from leaders and healthcare providers across the state who are fighting for reproductive freedom. The day will culminate with a rally in the rotunda.

Thank you for joining us to advocate for every Minnesotan’s right to make their own decisions about if and when to become a parent.